Gracie Jiu Jitsu is a form of Jiu Jitsu that is based on self defense. Since most fights end up on the ground, learning to defend yourself on the ground is essential. Agogi Academy of Combatives is an affiliate of Pedro Sauer.

The program’s mission is to provide support, training and networking for women who want to learn to protect themselves. Grace Cassens, a purple belt in Pedro Sauer Jiu Jitsu, is the head instructor for the program that covers self-defense, fitness, and jiu jitsu.

Kali is a weapons based system from the Philippines. One of the training methods that makes it different from other Arts is that you start with a weapon from the beginning. Many other Arts do not teach weaponry till later into the training.
Learn More 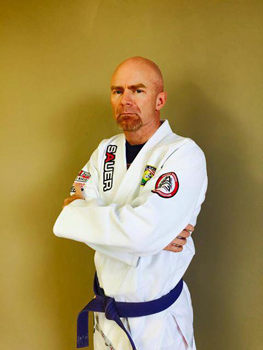 Chris was born in the Midwest but has settled into the Central Florida area permanently. He was on his high school wrestling team and continued on to coach and compete in wrestling in the late 1990s.

He discovered Gracie Jiu Jitsu by watching a video of Royce Gracie fighting in the UFC. He immediately sought out a Jiu Jitsu instructor and has continued to train since. Chris is a certified instructor in the Pedro Sauer Association. . When he lived in the Washington, DC area, Chris worked as an instructor and school manager for Pedro Sauer’s main academy.

Chris is dedicated both professionally and personally to the development of Self Defense. 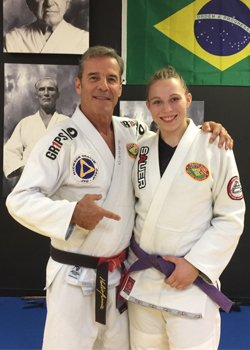 Grace CassensPurple Belt
Grace Cassens is a Purple belt under Master Pedro Sauer. She is from the Ocala area. She is one of the founding students at our school. She is passionate about women’s self defense as well as Gracie Jiu Jitsu, and Kali. 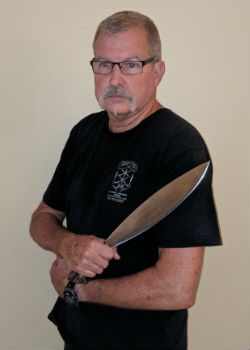 Chip KelleyKali/JKD Instructor
Chip was born and raised in Miami, FL. He first started training in college where he took a Judo Class.

He continued his training in Tae Kwon Do under Terry Noel in Kendall, FL. For more info: CLICK HERE

We as a household really appreciate the open schedule and friendly learning environment. My daughter has learned a bundle of lifelong self-defense tactics and says its like a extended family and I agree. She is more fitness aware since she started about a year ago now.”

“My son and I are very pleased with the training we receive at your Agogi Academy of Combatives. The school is a “no pressure” school allowing students time to master all of the techniques without criticism from the instructors.”

“The training at Agogi has given me confidence in my day to day life.  I have lost weight due to training with Chris and Kathy. The environment there feels like home.”

“I’m very satisfied with your class and the way you prepare the children for real life, because it’s not all rainbows and unicorns. Chris is amazing, his temperament, patience, and charisma is infectious.”

We have a great summer planned at Agogi! Join us for the following special events! [...]

Prevent. Protect. Prevail. Personal safety can be at a great risk when getting in and [...]